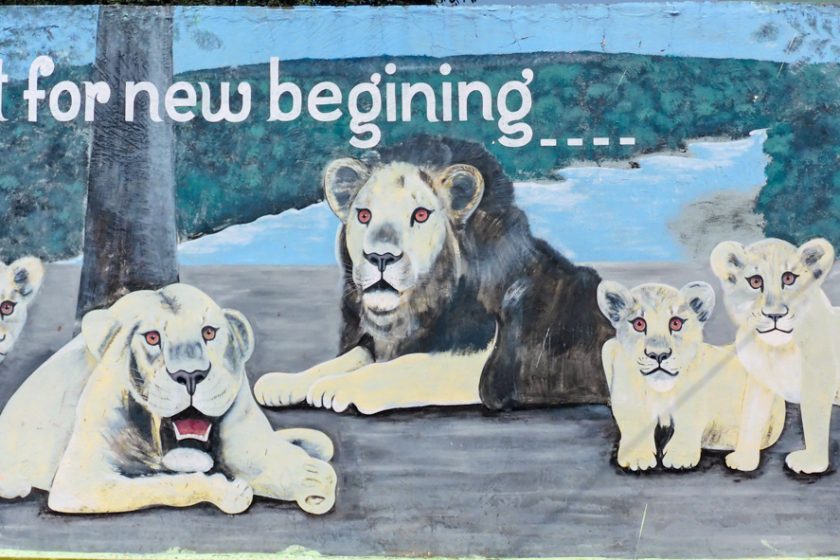 Getting away from the crowds is not always easy in India; and the country’s tiger reserves are no exception. Instead of being places where wildlife enthusiasts can sit quietly and enjoy time watching one of natures most magnificent creatures, safaris are usually frantic affairs, with convoys of vehicles rushing across the park in response to the news that a tiger has been sighted; trailing clouds of dust behind them.

What a pleasant surprise then, to discover a wildlife sanctuary where you are unlikely to encounter any other vehicles.

Kuno National Park is a protected area in Madhya Pradesh that received the status of national park in 2018. The protected area was established in 1981 as a wildlife sanctuary with an area of 344.686 km² in the Sheopur and Morena districts. It was also known as Kuno-Palpur and Palpur-Kuno Wildlife Sanctuary.
Park named after Kuno river and Palpur village – the river divides the park

On either side of the main park entry gate, lions are painted on the walls; a male on one side and a female with cubs on the other.
In the 1990s, Kuno Palpur was selected as a possible site to implement the Asiatic Lion Reintroduction Project, which aimed at establishing a second lion population in India.

Inside the park, at the Palpur rest house is another mural of a family of lions, stating that park is all set for a new beginning.

But, so far, the lions have not arrived. Some blame Prime Minister Modi who, as a former Chief Minister for Gujurat (the only state to currently have a lion population) is under pressure from Gujurat to block the relocation. The thinking being that if lions can be seen in Madhya Pradesh, which is in Central India and close to some of the country’s best known tiger reserves, it will lead to a drop in visitors to Gujurat.

Others are still claim to be concerned over the gun culture, anti-social activities and poaching that is rampant around Kuno wildlife sanctuary in Madhya Pradesh where some of the Gir lions are to be shifted.

Until quite recently the Chmbal / Kuno region was known as a centre for Dacoit activity, with one of the more celebrated ones, Amrit Lal, apparently dropping in to the Kuno rest house on a regular basis.
The dacoits were essentially bandits, though they claimed to be rebels, fighting injustice, seeking to alleviate feudal oppression of the poorer classes. They would regularly kidnap wealthy people and demand ransom from their relatives.

For many years, much of the Kuno Chambal region was regarded as bandit country, though ,following intense anti-banditry campaigns by the Indian Police, highway robbery was almost completely eradicated in the early 2000s. I have to say it seemed pretty safe to me.

The report, ‘Action plan for the reintroduction of the Asiatic lion in Kuno Wildlife Sanctuary Madhya Pradesh,’ recommends that the gun culture in the region needs to be dealt with appropriately without disturbing local socio-economic customs.
“A large majority of the people in the area own weapons, mostly licensed guns,” says paragraph 19 of the report. It states that people from lower economic strata depend on livelihoods based on forest products. These people have to be provided with alternative livelihood options.

The sanctuary currently has a core protected area of 300sq km, with a buffer zone – local villages and farms – of 900sq km.
The plan, to accommodate the relocated lions, is to increase the core area to 600sq km, reducing the buffer zone to 600sq km. This will necessitate the resettlement of more villages. Between 1998 and 2003, about 1,650 inhabitants of 24 villages were resettled to sites outside the protected area.

Tigers were introduced into Kuno Palpur a while ago but failed to establish themselves and at the moment the top predator is the leopard. The sanctuary is estimated to have over 40 of the big cats though they are not at all accustomed to vehicles and visitors and remain very elusive.
That said, we did see a leopard within 15 minutes of entering the park. It was still pretty dark and it moved off through the trees as soon as we saw it, but it counts.

Kuno Palpur’s leopards are large in size as well as in number. When the former population were moved out and resettled they left behind many of their cattle. In the intervening years these cattle have become feral and continued to breed in the forests making easy prey for the leopards and allowing them to become larger than would be normal in other areas where they face competition from tigers.

Another species found here is the melanistic jungle cat, much smaller but just as elusive.

As things stand, Kuno Palpur is not likely to feature on many tourist itineraries, we saw just one other vehicle during our entire stay. Even if the Asiatic lions are eventually introduced it will be a while before the park attracts any significant numbers.

Despite the large leopard population, you are unlikely to get good sightings, and there are other parks where good sightings are almost guaranteed, so the main reason for coming here is to enjoy an area of pristine wilderness that is quite unique in India today.

The former Dak Bungalows, once used by British colonial officials in India, have been refurbished and renamed as the Jungle Resort and offers accommodation close to the park at a very reasonable cost.

It is not swish or particularly well run, but it is close and convenient, with a super location overlooking the Kuno river.

If you’d like more details about visiting Kuno Palpur or
help with planning your safari in India
just email us or phone us.
Click here to Email Us