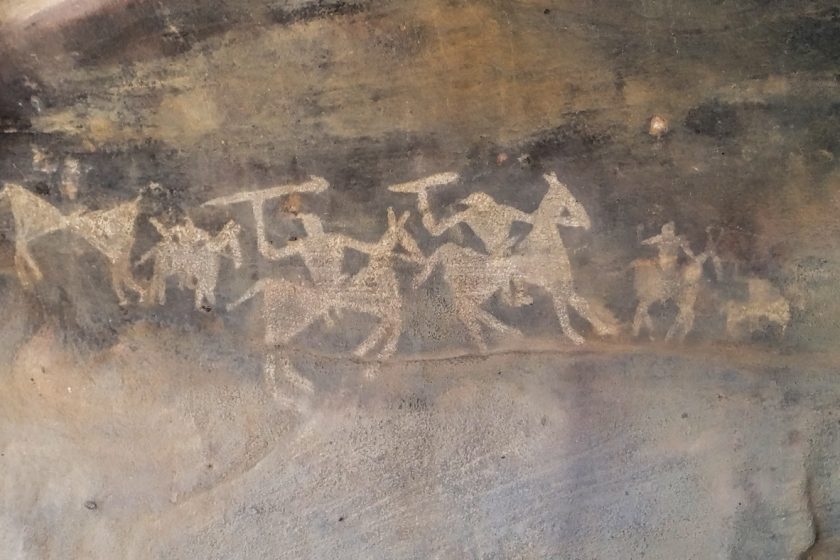 Most of my travelling is done with the explicit purpose of viewing and photographing wildlife. As far as possible I avoid cities, they just don’t excite me. Too much noise, too much traffic and too many people. I much prefer the open spaces and tranquillity of the bush.

Yes, I’m a bit of heathen really, and will rarely go out of my way to visit a museum or historical site. There are occasional exceptions though and I have a particular soft spot for ancient rock art.

It’s not as incongruous as it might sound. The sites where rock paintings are found are usually located in remote rugged terrain and the art itself illustrates a time when man and nature were far more in harmony than they are today.
There is the added bonus that these scenes of life and rituals from thousands of years ago rarely attract large crowds of visitors.

So when I learned that the Bhimbetka Rock Shelters were just 15 minutes off our route to Satpura Tiger Reserve, it was an opportunity not to be missed.

The Bhimbetka rock shelters are a UNESCO World Heritage archaeological site located in Central India, 45km to the south east of Bhopal.

Bhopal, with regular flight connections to & from Delhi, is one of the most frequently used gateways for visitors to Satpura Tiger Reserve.
The drive from Bhopal to Satpura takes around 4 hours and passes so close to the Bhimbetka site it is well worth breaking the journey for an hour or so to take a look around.

You can actually see the striking rock features of the site silhouetted against the skyline from the main road, even before reaching the turnoff.

The site that consists of seven hills and over 750 rock shelters distributed over 10 kilometres. The shlters and paintings themselves date from several different periods; at least some of the shelters were inhabited by Homo erectus more than 100,000 years ago. The rock shelters and caves provide evidence of, and a “rare glimpse” into, human settlement and cultural evolution from hunter-gatherers, to agriculture, and expressions of spirituality.

Some of the Bhimbetka rock shelters feature prehistoric cave paintings, the oldest known rock art in the Indian subcontinent, the earliest are about 30,000 years old. These cave paintings show various animals, and early evidence of dance and hunting.

The site is extensive and walking around I was immediately struck by the similarities with rock art I’d seen in parts of the Australian Outback; in particular the sites at Munurru close to the King Edward river on the Mitchell Plateau. The painting styles are very different but the materials used were similar and the geology of the locations is surprisingly similar.