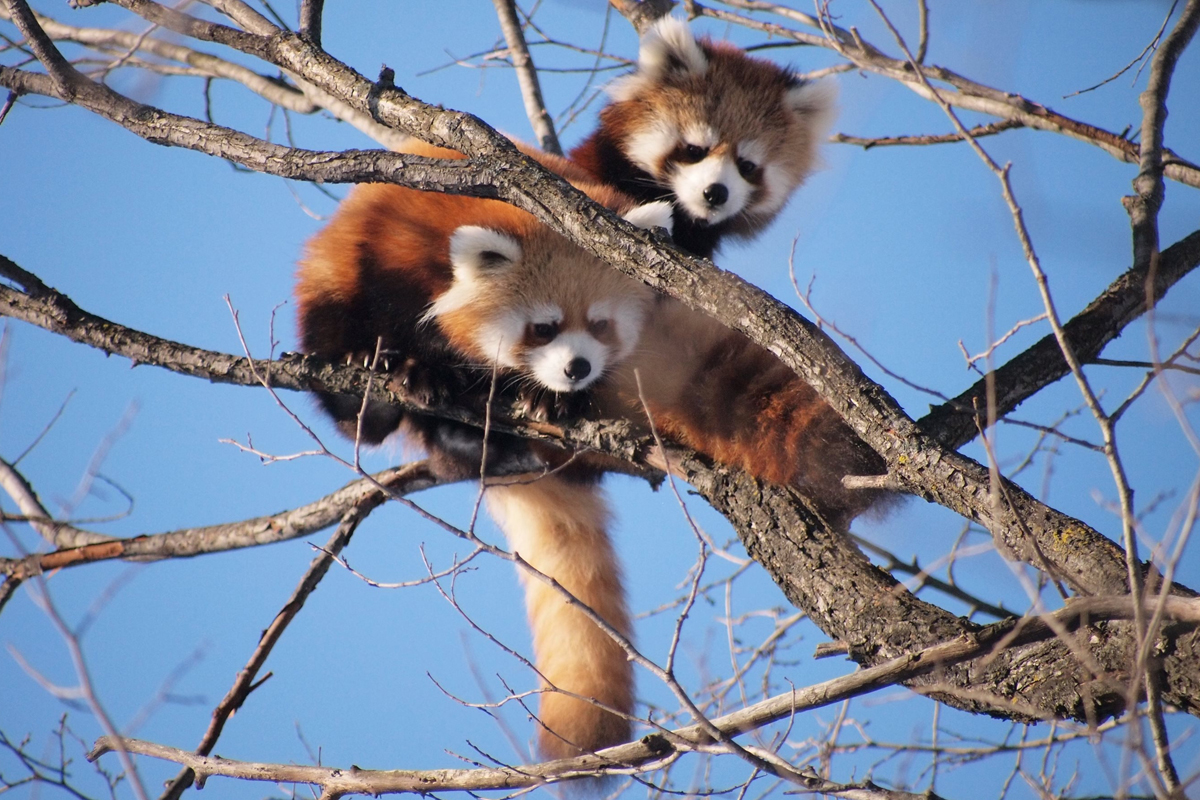 India is full of wonderful species waiting to be seen and appreciated; undoubtedly one of the cutest creatures of them all is the Red Panda. It is also the only true “panda” species in the world; the Giant Panda is actually a bear.
The red panda is slightly larger than a domestic cat with a bear-like body and thick russet fur. The belly and limbs are black, and there are white markings on the side of the head and above its small eyes.

Red pandas were once thought to be closely related to the giant panda, but genetics has shown they are more closely allied with the raccoon and weasel families. They are secretive and gentle creatures, spending most of the day sleeping curled up with their tail wrapped around their head.

Red pandas are very skilful and acrobatic animals that predominantly stay in trees. Almost 50% of the red panda’s habitat is in the Eastern Himalayas in dense forest and bamboo thickets in elevations ranging from 6,000 – 12,000 feet.
These animals spend most of their lives in trees and even sleep aloft. When foraging, they are most active at night as well as in the gloaming hours of dusk and dawn. Red pandas have a taste for bamboo but also eat many other foods as well—fruit, acorns, roots, and eggs.

Our program take you to two states in India – to Singalila National Park in West Bengal and to Satpura Tiger Reserve in Madhya Pradesh. The regions differ vastly in the habitat and the fauna.

Singalila National Park is one of the most exotic Himalayan forests in India. It is a wilderness located on the Singalila Ridge at an altitude of 7000 feet to 12000 feet above sea level with an area of 78.6 square kilometers.
This is a birding paradise as well. More than 300 species of birds have been recorded here. It has a huge list of exotic birds.

Satpura offers a different style of safari and is excellent for exploring the central Indian jungles in canoes, on foot and even allows one to do dusk drives. Known for a high density of sloth bears, leopards and Gaur (Indian bison), it also is home to interesting lesser known species such as the Indian Giant Squirrel, rusty spotted cat and the small Indian civet. Satpura is home to about 350 bird species including the much sought after Indian Skimmer.

Day 1
Arrive in Delhi. Group participants will arrive from various destinations today so no activities are planned. Overnight in Delhi.
NOTE: Optional activities within the city can be organized – at additional cost – for those who arrive early.

Day 2
We check out after an early breakfast and transfer to the airport to catch our flight to Bagdogra, where you will be met on arrival. Break for lunch before starting a long journey to Singalila National Park that lies on the border of India & Nepal. Arrive at Habre’s Nest, home for the next 5 nights, in time for dinner.

Days 3 – 5
3 days exploring Singalila on foot in search of Red Pandas and other wildlife.
The park is home to over 600 species of orchids and is the largest concentration orchid blooms in a single geographical area.

Sandakhphu is situated within Singalila National Park and is the highest peak in West Bengal. Sandakhphu offers the best view of Kangchenjunga also known as Sleeping Buddha or Sleeping Shiva.

Day 6
Today is your last day of exploration in the eastern Himalayas. We recommend you take time to see and photograph the stunning sunrise and sunsets in this Himalayan paradise.

Day 7
Much of today will be spent travelling back to Delhi. After breakfast take the road transfer to Bagdogra from where you catch your flight to Delhi (1630/1850). Overnight will be at Holiday Inn Aerocity.

Day 8
We have a very early start this morning. We fly from Delhi to Bhopal (0555/0720). You will be met at the airport and transferred by road to Satpura Tiger Reserve (approx. 4hr). You should arrive at the Forsyth Lodge by 1200/1230, in time for lunch.
After time to unpack and relax, your exploration of Satpura begins with a walking safari in the tiger reserve.

Day 9
Today the whole day will be spent in the forest. The morning safari is used to get to Churna and the afternoon safari gets you back. The middle part of the day is spent at Churna Forest Rest House where there is abundant bird life to entertain you.
For those interested in rock art there is an option to hike up to some caves not too far away. Return to Forsyth Lodge for dinner and overnight.

Day 10
A change of pace today as you’ll be exploring the river and streams of Satpura by canoe. Early risers also get to enjoy a spectacular sunrise on the river. Canoe safaris are excellent for watching and photographing riverine birds, crocodiles as well as land mammals coming down for a drink. The afternoon is at leisure before setting out on a dusk drive into the buffer forest to search for nocturnal animals.

Days 11 & 12
Morning and afternoon game drives in Satpura, in search of the tiger, leopard, Asiatic wild dogs and the sloth bear.

Day 13
Free morning followed by a leisurely lunch. After lunch transfer by road to Bhopal to catch an evening flight to Delhi (2040/2205) and connect with your international flight back home.

Habre’s Nest is a homestay that is located in the quaint hamlet of Kaiakata on the India and Nepal border. The home is built in Nepali design typical of this region and houses all basic amenities that guests will require. It is a research hub along with a wildlife tourism centre promoted by like minded wildlife enthusiasts. This project was ideated and executed by Shantanu who has been working in the Singalila ridge since 2011.

Nestled in the midst of 44 acres of jungle at the edge of the Satpura Tiger Reserve, Forsyth Lodge makes every effort to tread as lightly as possible on the ecosystem while making an exciting encounter with nature possible for the visitor. This is reflected in the care with which their buildings are constructed, and in the ways in which they manage and recycle water, and in the manner in which they cast about for better alternatives to existing technology.

At Forsyth, there is a team of enthusiastic and passionate individuals, dedicated to helping their guests discover the diversity of the wilderness at Satpura.

Tell me more
Book this tour